This survey is an initiative of the Financial Services Authority to assess the impact of COVID-19 on the insurance sector in Seychelles and understand how businesses have responded to the pandemic. We will compile this information in a report, highlighting key trends and opportunities for the sector that arise out of the pandemic. The data will solely be used for the purpose of the research and will remain confidential.

The Financial Services Authority (“FSA”) issued an advisory dated August 30th, 2019 advising the general public and potential investors to be vigilant when engaging with entities providing services within the Financial Technology (“Fintech”) landscape, including but not limited to services pertaining to virtual assets, such as crypto-currencies and other services that are required to be undertaken only by approved, licensed or regulated persons. It is important to note that a vast majority of these services are being offered over the internet and the operators in question are not based in the Seychelles.

Regrettably, it has recently come to the FSA’s attention that it appears that there continues to be a number of companies purporting to be carrying on businesses and providing services related to the Fintech realm, when they are not authorized to do so. Furthermore, some of these entities are claiming that they are licensed and regulated by the FSA which is not correct.

For clarification purposes, the FSA licences and regulates entities as can be found here only.

The FSA would like to inform the public in general that it has come to be aware that some of these businesses are set up as International Business Companies (“IBCs”) that may be registered in Seychelles. It is necessary to note that being an IBC does not translate that an entity is licensed or regulated by an Authority but rather that it has been set up or incorporated as company in Seychelles. To carry out any activity, the IBC, similar to any legal person, has to have the appropriate authorisations in the form of a licence to carry out specific activities.

The FSA would like to inform members of the public and investors that whilst it is necessary that it is contacted in cases of perceived wrong doing by the service providers in question so that it can carry out necessary enquiries, it would equally like to point out that in such cases it is difficult for the FSA to assist members of the public and investors with some form of redress, such as the retrieval of any funds from the providers concerned, in view that they are not licensed nor regulated by the FSA and often times are not based or conducting the activity in the Seychelles.

Before engaging the services of such companies and any other entities providing services specified herein, it is recommended that investors and members of the public undertake careful due diligence to evaluate the investment opportunity. The following questions, amongst others, should be duly considered:

In light of the above, the public is invited to provide the FSA with any relevant information on any entities purportedly operating in or from within Seychelles, and on any improper activities engaged in by such entities.

The FSA has issued this Advisory pursuant to Section 4(1)(m) of the Financial Services Authority Act, 2013.

Reference is made to the FSA’s alert posted on February 4th, 2021 on the International Business Company ("IBC"), Mek Global Limited with IBC number 207897 and a recent interview by the FSA that was aired on February 11, 2021. At this point in time, the FSA has deemed it important to convey additional information in relation to the IBC in view of it being aware of certain information being circulated within the public domain that may not necessarily represent the true facts of the case and the position of the FSA on the matter.

With regards to the information available on the public domain concerning an alleged “hack” on the cryptocurrency exchange platform of KuCoin, that apparently took place over the course of 2019 and 2020 the FSA hereby informs the public that whilst it is concerned at the allegations being made involving a Seychelles IBC, it recognizes that the alleged illicit act may have a negative impact on the platform as well as to the users of the platform concerned.

The FSA would also like to inform the public that the exchange platform appears to be affiliated with the IBC, Mek Global Limited. The FSA wishes to inform the public that enquiries into the affairs of the IBC was initiated in 2019 following receipt of certain information from both domestic and international supervisory counterpart authorities. It is to be noted that the IBC was eventually struck off the Register of IBCs in November of 2020 by the FSA, but is yet to be dissolved.

As part of its procedures in matters such as these the FSA also issued an alert on its website on February 4th, 2021 to advise the public that whilst the IBC Mek Global Limited was incorporated in Seychelles under the International Business Companies Act, 2016, the company is not regulated or licenced by the FSA to conduct businesses of any type in Seychelles including those that were being offered by the online platform which also made reference to the IBC in question on the platform.

The public is thereby advised that the FSA’s enforcement action (i.e. the striking-off) against the IBC Mek Global Limited was as a result of its own separate investigations and enquiries in the affairs of the IBC and was not in any way linked to the recent publications of the “hack” on the KuCoin platform which has been published recently.

The FSA is cognizant that businesses operating the in sphere of financial technologies, or fintech, is highly susceptible to attacks by cybercriminals. In that regard, the FSA strongly urges investors and members of the public to undertake careful due diligence when evaluating an investment opportunity in fintech and to exercise extreme caution in respect to the services offered by unlicenced and unregulated companies.

Through information available in the public domain, Mek Global Limited appears to be affiliated with an online trading platform for virtual assets, namely KuCoin Cryptocurrency Exchange Platform, and is soliciting investors and customers through its website: https://www.kucoin.com/

The FSA hereby informs the public that Mek Global Limited does not hold any licence issued by the FSA to undertake such type of activity. Therefore, the entity is not being regulated by the FSA nor has it been in the past.

The FSA strongly urges investors and members of the public to exercise caution in respect to the services offered by Mek Global Limited.

This notice is issued by the Financial Services Authority of Seychelles (“FSA”) drawing attention to the following website: https://lelmm.com/ and the fact that contrary to what is being mentioned on this website’s User Agreement, the entity known as LELMM GLOBAL is not licensed nor regulated by the FSA in any capacity. Details on the website are as follows:

The FSA Seychelles urges investors and members of the public to exercise extreme caution in respect of LELMM GLOBAL. 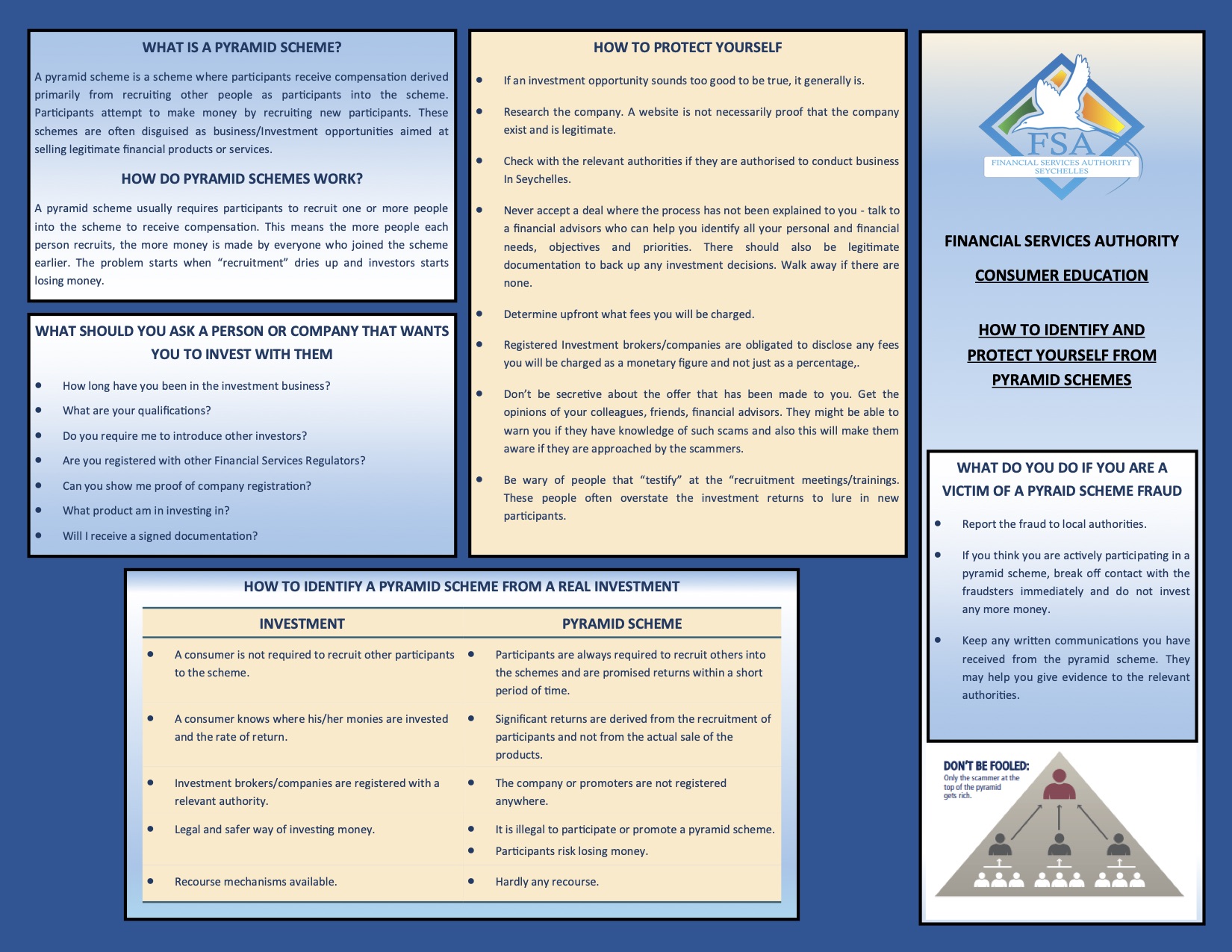 The National Anti-Money Laundering and Countering the Financing of Terrorism (AML/CFT) Committee, has started work towards its objective of strengthening the Seychelles’ AML/CFT framework.

This notice is issued by the Financial Services Authority of Seychelles (“FSA”) drawing attention to the following website: https://axismarketfx.com/ and the fact that contrary to what is being advertised on this website, the entity known as Axis Market FX. is falsely advertising that they are licensed and regulated by the FSA to conduct business as a Securities dealer. Details on the website are as follows:

The FSA Seychelles urges investors and members of the public to exercise extreme caution in respect of Axis Market FX.

Circular No 13 of 2020 – Acceptance of digitally signed documents

This Circular is being issued with the aim of notifying all stakeholders of the Financial Services Authority’s (“the Authority”) acceptance of electronic documents that have been digitally signed, in accordance with the Seychelles’ legislations.

Find us on Google Map